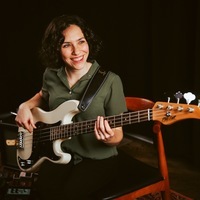 Ryan Madora is a Nashville-based producer, writer, educator, and bass player. Currently on the road with guitar virtuoso Robben Ford, she is also the musical director for country icon Bobby Bones and the Raging Idiots. Since moving to Nashville in 2012, she has backed up artists including Brooks and Dunn, Hanson, Carrie Underwood, Darius Rucker, and Garth Brooks and has appeared on three seasons of the television show, “Nashville.”

Bringing eclecticism, groove, and musical intention to every gig, she is frequently called upon in the studio and can be heard on records with Robben Ford, Lamont Dozier, Kyshona Armstrong, and her own instrumental trio, The Interludes.

An educator at heart, Ryan teaches and writes monthly columns for Bass Player Magazine and No Treble. In 2019, she published her first book, Bass Players To Know: Learning From The Greats which has received rave reviews from Bass Player Magazine. Ryan also has an online learning channel with TrueFire and is currently accepting new private students.