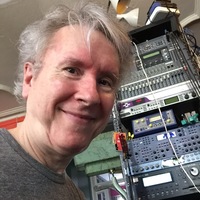 My experience in the music and entertainment industry is extensive and well rounded. I’m a multi-instrumentalist producer/arranger mastering drums, bass and keyboards, playing on TV shows, commercials, and working with recording/touring artists including Ozzy Osborne, Suzanne Vega, New Kids On The Block, Lenny Kaye, Rick Derringer and Edgar Winter, Ellen Foley, & Garland Jeffreys. I was a founding member of Blessid Union of Souls and co-producer of the band's top selling albums and high charting singles including a #1 (“I Believe” 1995) as well as being involved with radio promotions and public relations. I've worked as a composer on various Sesame Street projects including “Bert & Ernie’s Great Adventures” and “The Electric Company”, and countless things for Comedy Central, including all scoring and themes for their animated series “Shorties Watching Shorties”

I was the Primary Music Consultant on Denis Leary's FX network series “Sex, Drugs & Rock & Roll” which ran for two seasons 2015-16. This gig had me doing everything from serving as Musical Director for all the music recorded for the show, to working on set with the cast and guest actors in getting them to look like they were really playing, to coordinating with props, electric, and art departments to capture the realism Denis wanted in all aspects of the music performances on the show. I was also entrusted to find musical talent not only for the recording sessions but also when it came to on-screen musical performers.

I was the first specialized synthesizer salesman at the famed Manny’s Music Store on 48th st. My client list included Harry Belafonte, The Police, Ray Davies and John Lennon. I was able to develop strong relationships and gain my clients’ trust by being professional and well versed in the products I was selling.

In my list of credits below, I’ve often worked as Musical Director. This title requires that I not only deal with the music and musicians, sometimes in large ensembles, but also co-ordinate with producers, event planners, media, and production staff in a seamless way towards the goal of the project.

· Composer for the Independent film: “My Name is Nigel”

· Musical Director for the “Howl! Festival’s Tribute to Harry Nilsson”

· Musical Director for Denis Leary’s “The Rescue Me Comedy Tour”

· Musical Director for “The New Exploding Plastic Inevitable” for the Tweed Theatre Company as part of the Howl Festival ’09.

· Underscore Composer for PBS “The Electric Company”, “Sesame Street” and “Bert and Ernie’s Great Adventures” (thru 2009)

· Co-musical director for “OK!” the Bard College produced/Daniel Fish directed production of “Oklahoma!” at Bard College. This was the original production that went to Broadway.

· Featured musician for “The Elliott Smith Project”, a dramatic song cycle based on Elliott Smith’s ‘From a Basement on a Hill’, conceived and directed by Daniel Fish, and produced by True Love Productions at the Bard College

· Co-composer/musician for in-house music for Luxottica’s chain of retail stores.

· Theatrical sound design for the Off-off Broadway production of “Jesus and Mandy” at the Theatre For the New City.

· Composer for the “COMEDY CENTRAL ROAST OF DENIS LEARY”.

· Musical Director for Denis Leary’s band, “The Enablers” (to present)

· Founding member and co-producer of BLESSID UNION OF SOULS.