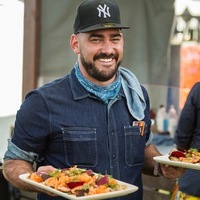 Born in Kansas City, Ty started flipping hamburgers at Sonic when he was sixteen, and he’s been at it ever since. He began his professional career with a series of apprenticeships, studying bread baking in British Columbia and Italian cuisine in Park City, Utah. After these forays, he turned up the intensity, earning a full scholarship from the National Restaurant Association Education Foundation to pursue an A.A. in culinary arts at Seattle Culinary Academy. Named to the dean’s list, he was awarded a fellowship from the International Association of Culinary Professionals to continue his education in France. At the École Lenôtre à Plaisir, he studied chocolate and pastry work under some of the finest chefs in the world.

During and after schooling, Ty augmented his formal training with real-world experience in a diversity of settings, from multi-starred restaurants in Denmark to simple street stalls in Thailand. Closer to home, he worked across North America in Seattle, Chicago, and New York for a variety of employers and in a range of positions—from dishwasher to Director of Operations.

Throughout his career, Ty has forged relationships with organic farms, natural winemakers, and mindful purveyors, both on his own and through his work with groups such as Outstanding in the Field. In 2011, Ty expanded his network further appearing on Season 9 of Bravo’s Top Chef and recently on the YouTube Channel of Mr. Beast. As he gained experience, he continued to devote his time and skills to the community, serving nonprofits like Share Our Strength and All Nations Gathering Center.

In 2018, after a more than a decade of operating in NYC, Ty relocated to Los Angeles to implement his unique vision for farm-to-table experiences as a culinary atelier: Tropical Fish Store. There, Ty uses a careful fusion of ingredients to curate unforgettable moments with a raw, sensual edge. TROPIC OF CULINARY is the boxed up to-go version of Ty’s world of food, friends, travel, art, music, and everything else that captures his parting glances.