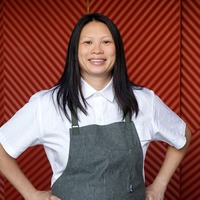 Christine Lau, Executive Chef of Kimika
Christine Lau was raised in Oakland, CA, where her family immigrated from Hong Kong, and at 17 she landed her first restaurant job at One Market Restaurant. She moved to New York to attend New York University, surrounded herself with people who worked in the restaurant industry, and ate her way around the city. During this time, Christine decided to follow her passion, and took the leap to become a chef. Her first culinary job in New York was at Alto, where she was the first female to cook at the pasta station under acclaimed chefs Kevin Sippel, Scott Conant and Chris Cannon. For the next three years, Christine worked as a sous chef at Centivini, under Michelin-starred chef Patti Jackson, and continued to develop her craft of handmade pasta. After working in top New York kitchens for many years, Christine traveled to Asia, where she spent months in Thailand, Vietnam, Hong Kong and Taiwan, and immersed herself in each countries’ food and culture. Upon returning to New York, Christine worked at Bar Basque at the Eventi Hotel, where she met Doron Wong, and The Sea Grill, under chef Yuhi Fujinaga where she had opportunities to develop seasonally-driven menus and also implement her travels and learnings. She then became the executive chef at Bar Chuko Izakaya in Brooklyn, where she had the opportunity to take the influences and inspirations from her Chinese-American upbringing and extensive travels through Asia to create a seasonal Japanese-inspired menu, which also included an extensive yakitori program. Most recently, Christine managed the food and beverage programs for Graduate Hotels, where she conceptualized nationwide menus and launched their brand wide coffee shop, Poindexter. At Kimika, Christine is excited to offer a flavor-forward menu of Japanese and Italian cuisine, with elements of seasonality and greenmarket inspiration.