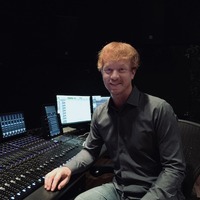 Tom Marks, CAS has mixed feature films, foreign films, TV & streaming shows, theatrical trailers, video games, virtual reality, film scores, and songs for Roland Emmerich, Jon M. Chu, Lana Wachowski, Frank Darabont, Patty Jenkins, James McTeigue, Scott Waugh, Ava DuVernay, Martin Campbell, and many others. He has worked in many of the current and emerging formats including Dolby Atmos, 7.1, 5.1, Auro-3D, and IMAX. Tom has been a member of the Cinema Audio Society since 2009. Prior to moving to Los Angeles in 2003, his background was in live television and music, both studio & live. When not mixing, he enjoys participating in other parts of the industry including studio design, product development, and teaching. Outside of work, Tom enjoys traveling, food, sports, and architecture.