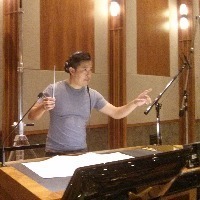 Timo is an Emmy-award winning composer whose work spans genres of documentaries, comedies, dramas, and science fiction. His talents were nurtured at a young age at the USC Community School of Performing Arts (now the Colburn School) and on through his studies at the Oberlin Conservatory of Music as well as into his adult life around the world studying and performing a diverse array of music including Chinese Pop, American Jazz, Balinese Gamelan, and Peking Opera.

After spending a number of years assisting composers and working in the realm of music technology and perforamance, Timo was selected to be a fellow for the 2014 Sundance Film Music and Sound labs at Skywalker Sound. Shortly after, he returned to the 2015 Sundance Film Festival having scored Jennifer Phang's film, "Advantageous." Most recently, he scored Emily Ting's film, "Go Back To China," which premiered at SXSW in 2019 as well as "The Thing About Harry" which premiered on Freeform in 2020.

His career in film and TV music has allowed him to work along side with dozens of composers, directors, and producers. His work can be heard on TV shows and films such as Earth Focus, City Rising, Desperados, The Wrong Missy, Already Tomorrow in Hong Kong, and Superstore. You can also hear his music in various iPhone applications, airline safety-videos, commercials, and award-winning independent films that have screened at festivals worldwide.