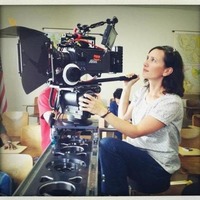 Tarin has shot a wide variety of projects and has worked all across the US and internationally in Brazil, Argentina, Canada and the UK. She has shot commercials for Covergirl, Spotify, Honda, Dodge, Starbucks, Disney, and many others. Her numerous music videos include St. Vincent, Maggie Rogers, Death Cab for Cutie, The Decemberists, Chris Cornell, Lenka, Joss Stone and Young the Giant. She has also shot documentaries featuring James Brown, Joseph Gordon-Levitt, St. Vincent, as well as Robert Durst (as featured in HBO’s The Jinx).  Tarin also shot Corporate Animals which premiered at Sundance 2019 as well as her most recent feature We Summon the Darkness which premiered at Fantastic Fest 2019. In 2019, she shot two tv series, On My Block for Netflix and Vida for Starz.

A native of Seattle and resident of Los Angeles, Tarin earned her Masters degree in cinematography at the American Film Institute after studying film at both Vassar and Hampshire College.

This expert donates all Sidetime proceeds to Girls Inc.