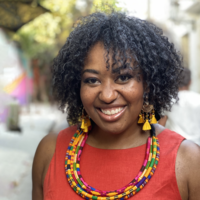 About me: Film and Television Editor
Known for: The Photograph, Queen Sugar, Grown-ish, #blackaf
Experience: 15 years
Starting at: $10
Base Cost: $1/min

Shannon Baker Davis is an award-winning television and film editor, who began her career in New York, editing unscripted shows and documentaries. After 10 years working on many iconic and Emmy-winning shows such as Top Chef and Project Runway, Shannon began adding narrative television and feature films to her resume. Her credits include Insecure, from Issa Rae, Grown-ish, a spin-off of the highly acclaimed series, Black-ish, from creator, Kenya Barris and Queen Sugar, from creator Ava DuVernay. In features, she edited Armstrong, starring Vicky Jeudy, Sean Parsons, Jason Antoon and Kevin Pollak, and The Weekend (Lionsgate), starring Sasheer Zamata, Tone Bell and DeWanda Wise, from director, Stella Meghie. The Weekend had it’s World Premiere at Toronto Film Festival in 2018, and screened at AFI Fest, South by Southwest and Tribeca Film Festival. Next, she cut the feature, The Obituary of Tunde Johnson, directed by Ali LeRoi (creator, Everybody Hates Chris) which premiered at TIFF in 2019. Shannon reunited with Stella Meghie on The Photograph (Universal), starring Issa Rae and LaKeith Stanfield. Her most recent project is the Netflix series #blackaf, created by Kenya Barris (Black-ish, Grown-ish, Mixed-ish), which stars Barris and Rashida Jones. Her series and film credits run the gamut, from funny to heartbreaking, provocative to visual-effects-heavy and action-packed. She is a member of ACE, where she is a mentor in their Diversity Mentorship Program, and she is the Co-chair of the African-American Steering Committee of the Motion Picture Editors Guild. Shannon grew up in Augusta, GA, earned degrees from Howard University and The American Film Institute, and resides in Los Angeles, CA, with her husband and 2 children.