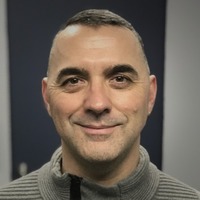 René Veilleux is the CEO and Co-Founder of Verité Entertainment where he spearheads
production and development on a variety of projects in film, television, animation, and new
media. He has worked in all aspects of production for numerous companies including:
DreamWorks, Warner Brothers, Frederator Studios, FremantleMedia, MTV, Mattel Creations,
Nickelodeon, Amazon Studios, and PBS. René also works as a Voice and Casting Director
for a number of animation projects including: DC Nation, Justice League Adventures, Hot
Wheels, Monster High, Enchantimals, and Subway Surfers, among others, as well as a number
of video games such as, Payday 2, How To Train Your Dragon 2 - The Video Game, Overkill’s
The Walking Dead, and The Elder Scrolls Online.

Along with voice directing a number of on-going projects, René is producing multiple animated
series which will be announced soon. Pre-production on Jack Worm, an action-packed
animated spy feature film (with Animaking in Brazil), for which René is a producer, has
commenced. He is also producing the feature length live-action thriller titled Let Me Breathe,
based on a short film by the same name, and co-producing an untitled animated feature
starring Mel Brooks, Jacob Trembley, Mads Mikkelsen, Kenan Thompson, Carol Kane and
Christopher Lloyd.