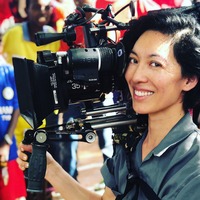 Quyen Tran is a Los Angeles based cinematographer who prioritizes story above all else. Her latest feature, PALM SPRINGS, premiered at Sundance 2020 and will be available on Hulu July 2020. UNBELIEVABLE, a Netflix limited series by Susannah Grant for which Tran shot the pilot, was recently awarded a Peabody Award.

Beginning her career as a still photographer, Tran gained acclaim for her stunning images of the heartbreaking destruction of 9/11. Her emotive cinematography captures the humanity and truth of each moment, regardless of the subject matter. She has shot films throughout the United States and in New Zealand, Kenya, South Africa, Canada, Thailand, Japan, China, Russia, Italy and Vietnam.

Tran was featured in American Cinematographer as an ASC Rising Star in 2017, and was recently named in Variety's 10 DPs to Watch 2019 this past April. She also was awarded the 2019 Distinguised Alumni Award from her alma mater UCLA earlier this June.

When she isn’t on set, Tran is an avid gardener, cook and mother.