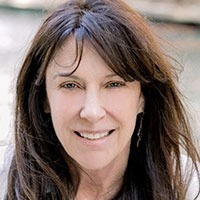 Feature film editor Nancy Richardson began her career with the 1988 film Stand and Deliver, which won
the Independent Spirit award that year for Best Picture and received a best actor nomination for Edward
James Olmos. Her many credits include Thirteen, Lords of Dogtown and Twilight, directed by Catherine
Hardwicke; To Sleep with Anger, Selma, Lord, Selma and Annihilation of Fish, directed by Charles
Burnett; and Mi Familia, Selena and Why Do Fools Fall in Love, directed by Gregory Nava. She also
edited the directorial debut of Maya Angelou’s Down in the Delta.
Other credits include Step Up, starring Channing Tatum, and directed by Anne Fletcher,
American Violet, starring Alfre Woodard and directed by Tim Disney, which screened at Telluride 2008,
TheTwilight Saga: Eclipse (shared credit), directed by David Slade, The Vow (shared credit),
starring Channing Tatum, directed by Michael Sucsy, Warm Bodies, starring Nicholas Hoult and directed
by Jonathan Levine, Divergent and Insurgent (both shared credits), starring Shailene Woodley,
Everything, Everything, starring Amandla Stenberg and directed by Stella Meghie, and the
recent Fighting with my Family, directed by Stephen Merchant. Fighting with my Family screened in the
coveted Sundance Surprise slot at the Sundance Film Festival in 2019.
She was an additional editor on Lisa Cholodenko’s The Kids Are All Right and the Transformers origin
story Bumblebee, directed by Travis Knight. Her next project, Paramount’s thriller Monster Problems,
starring Dylan O’Brien, was filmed in Australia and is expecting a 2021 release.
Richardson received a Primetime Emmy Award nomination for her work on the 2001 Showtime film
Hendrix. She was invited into the Academy of Motion Picture Arts and Sciences in 2005, and now serves
on the Executive Committee of the Editors Branch. She is also a member of American Cinema Editors,
and has been on the Editors Guild Board of Directors for more than 15 years. She has been a Creative
Advisor for the Sundance Labs several times, and helps in a similar capacity at Film Independent.
Richardson received her undergraduate degree from UC Berkeley and her M.F.A. from the UCLA School
of Theater, Film and Television.
She has been a professor and head of Post Production at UCLA TFT for 19 years and is currently serving
as Interim Vice Chair.