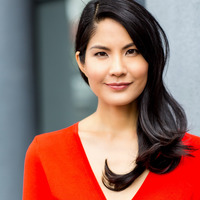 Lynn Chen has a 3-decade career that includes acting in over 50 TV/Film credits, audiobooks ("Crazy Rich Asians”), video games (Activision's “Call of Duty” series), singing (The Metropolitan Opera), and hosting non-scripted videos/podcasts (BuzzFeed, Tastemade) that have seen over 30 million views. She made her movie debut in Sony Pictures Classics’ "Saving Face," a role that won her the title of "Outstanding Newcomer" at the AXAwards. Since then, she has become a fixture on the film festival circuit - including Sundance, Toronto, Tribeca, SXSW - setting an unofficial record at the 28th LAAPFF with five concurrent movie roles. Lynn won "Best Actor" at the NBC Shorts Fest and a holding deal with NBC. She is featured in Variety’s “Power of Women” Issue.

Lynn has been a spokesperson for The National Eating Disorders Association (NEDA) since 2012 and is currently an Ambassador for Miry’s List. She founded the award-winning blogs/podcasts “The Actor’s Diet” and “Thick Dumpling Skin” (the first site dedicated to Asian-Americans and eating disorders). She has been featured on NPR, Cosmopolitan, and Marie Claire Magazine and has been a speaker at various colleges (Stanford, Dartmouth, Wellesley), conferences (WonderCon), and festivals (Disneyland California Adventure Food & Wine) for her body image activism.

Lynn recently starred in the feature film "Go Back to China," which premiered at SXSW in 2019. Recent TV credits include a recurring role on SHO’s “Shameless,” HBO's "Silicon Valley," CBS' "Seal Team," and AMC's "Fear the Walking Dead." Lynn’s directorial debut, which she also wrote, produced, and starred in - "I Will Make You Mine" - is the third sequel to the "Surrogate Valentine" series. The movie is an Official Selection of the 2020 SXSW Film Festival and currently available via DVD/Blu-ray and VOD Streaming.