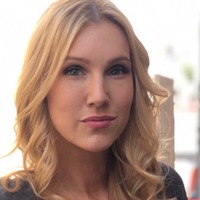 Liz Cardenas is a producer, writer, director and actress and a 2019 Independent Spirit Award nominee. Recent and notable producing and acting credits include Augustine Frizzell’s NEVER GOIN’ BACK (Sundance '18), starring Maia Mitchell, Camila Morrone and Kyle Mooney; David Lowery’s A GHOST STORY (Sundance ‘17), starring Rooney Mara and Casey Affleck (both distributed by A24); and Daniel Laabs' JULES OF LIGHT & DARK, the 2019 Outfest Best US Narrative Feature. She was recently included on the 2019 LATINXT, a highly curated list of emerging Latino creators from an initiative by Zoe Saldana, Robert Rodriguez and Lin-Manuel Miranda.

She has sold movies to A24, Lionsgate, E One and Wolfe Releasing, among others, as well as had her films in places such as Red Box and Wal Mart and on Netflix, Amazon Prime, Google Play, Apple TV and iTunes. Liz and has connections at several studios, sales and distribution companies and production companies. She spoke the the Fellows at the 2018 Sundance Creative Producing Summit, to high school film students at the American Pavillion at the 2018 Marché du Film at Cannes, college film students at various universities, and at organizations such as Women in Film and on filmmaking podcasts.

Under her production company, Ten to the Six Pictures, she has a slate of four features in various stages of development and production — filming in the US and abroad – two of which she’s written. And she's written a pilot for a series inspired by one of her short films. She produced a feature, MATERNA, and a short, BURROS, both of which were set to premiere in competition at Tribeca 2020. MATERNA went on to win jury awards for Best Cinematography and Best Actress.

She’s written and directed two award-winning short films, TREADING WATER, and IMAGO, and co-created a series of successful children’s films, ADVENTURES OF BAILEY, sold in the US and internationally. It was during that time she worked in film distribution, where she was VP of International Sales for a Los Angeles-based boutique distribution company. A 2018 Rotterdam Lab and a 2017 Film Independent Producing Lab and 2019 Fast Track Fellow, she also participated in the Producers Workshops & Network at the Marché du Film at the 2018 Festival de Cannes through Cinemart (IFFR).

She received a B.S. in Broadcast Journalism from TCU and is former reporter for The Dallas Morning News. Born in Chicago, based in Los Angeles, she considers Texas home, where she grew up with her Hispanic father and Irish-American mother. She is represented by Authentic Talent & Literary Management in Los Angeles and is a member of SAG-AFTRA and Women in Film.